Q&A with Author Natalie Charles: The Burden of Desire 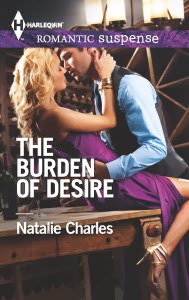 I've been looking forward to this interview since I first read this manuscript more than a year ago, and it is an honor to be chatting once again with my oldest friend and critique partner, Natalie Charles, on her captivating and highly entertaining new release, THE BURDEN OF DESIRE.

On the eve of trial, prosecutor Sally Dawson has all the evidence she needs to convict a man of killing his wife—until the "victim" reappears. Now, alone and pregnant, to save her career she must trust the very man who broke her heart—her sworn enemy, Ben McNamara.

The case confounds Ben, a former marine JAG, but not the attraction budding between him and Sally. Their mutual desire never died. Can Ben prove to her that he's a changed man? He may never get the chance, because the closer Sally gets to the surprising truth, the closer she gets to a desperate killer….

Congrats on your new release, THE BURDEN OF DESIRE. Can you tell us a little about the book?


Prosecutor Sally Dawson is having the worst day of her life. Not only is she stuck working with her ex, Ben McNamara, but the murder case she was working on has just blown up in her face. To save the job she loves, she needs to swallow her pride and accept help from the man who broke her heart. Sally is certain of three things: she works best alone, she's done with men, and she despises the arrogant Ben…so how is it that working with him calls all three of those convictions into question?
Where did the inspiration for this book come from?
I've been a little obsessed with forensics for years, and I once watched something about a real-life case in which a man was successfully tried for murder when no one could find the victim's body. My immediate thought was, What if the fail-proof forensic science was all wrong? From there, I developed the suspense part of the book.


As for the romance…after my daughter was born, I joined a group to socialize with other new moms and met a single woman who'd conceived her baby through intrauterine insemination. Of course I listened with rapt attention as she explained the process of choosing a father for her child, and then she kind of shrugged and said, "I figured I wasn't getting any younger, and it was now or never." It was such a bold, brave statement, and I knew at that moment that I had to write this book.
This is your second novel. In what ways was the writing experience different than with the first?
I found the experience of writing the second book extremely difficult. Maybe that's because I wrote my first book after winning a competition, but I had this anxiety that I was a one-hit wonder. It reached a point where I struggled with every single word, imagining the manuscript collecting dust in a drawer. I resisted writing, and then when I neared the end, I resisted finishing. If my editor, Rachel, hadn't prodded me for another manuscript, I'm not sure how long I would have taken. Now that it's finished, I love the book, but I was experiencing second book syndrome every step of the way.
Now that you have your debut under your belt, do you feel like a "real" writer?

In my mind, real writers lounge by the pool and breezily work on their manuscripts. My process is more like pounding coffee and staying up too late just to get another 500 words in. Real writers are much more glamorous in my mind than I could ever hope to be.

Is there a particular character or scene that you most connect with in this story?


I do love Sally. I'm not nearly as dramatic as she is (maybe some would disagree…) but I relate to her struggle to assert herself and be taken seriously in a tough profession.
You're a lawyer by day, and your procedural knowledge shines through in your books. Can you tell us how your professional training has changed the way you approach your creative work?

Law school teaches you about the power of words. Lawyers analyze commas and obsess over meaning and intent, and I'm in a job where we get downright pedantic about language. Words matter. I call on my professional training to understand how lawyers might approach a case or a problem, but I think that most of my training appears behind the scenes, where I edit my work like crazy.

THE BURDEN OF DESIRE has some page-turning plot twists. When you sit down to brainstorm a new book, which comes first, the suspense or the romance?

They kind of evolve together, to be honest. Some days, the romance is easier to write and I focus on that, and other days the suspense comes easier. I enjoy shifting between the two plots and playing one off the other. As for plot twists, I've always started off knowing whodunit. Getting my characters to figure it out is a completely different matter. I'm never quite sure how that will happen.

Tell us, why is your hero the perfect man for your heroine?

Ben is Sally's worst nightmare. He is the person who out-performed her in law school, broke her heart, and now threatens to displace her in her workplace. Ben also sees right through Sally's armor to her essence, and this, more than anything, terrifies her. It's what Ben does with that power that makes him perfect for Sally. I hate to give specifics because I don't want to spoil the book, but let's just say that Ben spends the entire book surprising Sally. 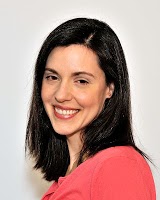 What are you working on now and what can readers look forward to reading by you next?


My next book for Harlequin Romantic Suspense, When No One is Watching, will be out in September. Aside from that, I'm currently working on something a little different – one of those projects that has been haunting me for years, so I need to get it out of my system. I promise I'll make an announcement as soon as I am able to share more details!

You can find out more about Natalie's books on her website, www.nataliecharlesromance.com.

Posted by Olivia Miles at 5:00 AM
Email ThisBlogThis!Share to TwitterShare to FacebookShare to Pinterest
Labels: Author Q and A, Harlequin Romantic Suspense, Natalie Charles, Olivia Miles, The Burden of Desire